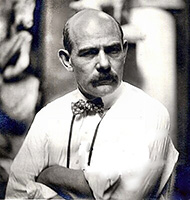 Gutzon Borglum is best remembered as the primary carver at Mount Rushmore.  But before he received that commission he was the primary carver at Stone Mountain.  A skilled and well known artisan, he was contacted by the Stone Mountain Confederate Monumental Association (SMCMA) and asked to create a likeness of General Robert E. Lee on the side of the mountain.  Realizing the size of the mountain and the insignificance of the requested relief bust, he proposed a much more ambitious carving.  His design included President Jefferson Davis, General Lee, Stonewall Jackson, an entourage of officers, and foot soldiers.

It is likely that Borglum understood the magnitude of the work, but believed he had techniques and skills that would lead to success.  He began his work in 1916 and was able to unveil the head of General Lee in 1924.  But stress, cost overruns, and disagreements with the SMCMA led to his departure soon after he revealed Lee's head.  As a final act of disagreement, Borglum destroyed all the working models of his proposed carving and left little way for the work to progress since the working model would have been needed to scale up to the final work.

To make matters worse, the SMCMA had him arrested and created a final riff between themselves the sculptor.  His dismissal and arrest created a divide between the SMCMA and the United Daughters of the Confederacy who dropped support for the project.  In later years Borglum's concerns were validated and many wanted him to return to finish the carving.  His continued fame with the success of Mount Rushmore made many believe that only he could complete the work.  But he died in 1941 without ever returning to the project.

The original 1916 agreement with the land owners for the purchase of Stone Mountain required that the carving be completed within twelve years or the land reverted to the original owners.  Borglum's departure gave the SMCMA little time to complete the structure but they hired Augustus Lukeman to attempt the job.  Lukeman was a renown sculptor with several military monuments to his credit and was capable of executing large bias relief works.

It could be that Lukeman's primary accomplishment was the removal of Borglum's work so that following sculptors would have a clean palette to work from.  He also scaled back the project to a more reasonable one and helped set the stage for its ultimate completion.  But even with Lukeman's dedication and willingness to work in the face of financial struggles the Great Depression ended this phase of the work and the land was returned to its former owners.  He went on to do other famous works including, interestingly, a full length statue of Jefferson Davis for the U. S. Capitol. 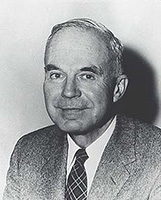 The addition of Walker Kirtland Hancock to the list of sculptors should not be taken lightly.  He was a significant political and military figure in addition to his work as a sculptor.  His addition to the list helps us understand the willingness of major artists to take on this challenge and to receive recognition as the one who conquered it.  He came to the project with notable references having built a number of war memorials and having his works included in the National Cathedral, the Library of Congress, The United States Supreme Court building, and West Point.  He  received international recognition for his work on several occasions.  But Walker Kirtland Hancock was more than just a sculptor.  By now many of us have seen the remarkable movie "Monuments Men".  Walker Hancock was one of the men who helped recover the looted European treasures from the Nazis.  For his service he was awarded the National Medal of Arts in 1989 and the Presidential Medal of Freedom in 1990.

In 1963 he took over the project to complete the work once it was owned by the State of Georgia.  It was his partnership with Roy Faulkner that brought the project to a successful conclusion. 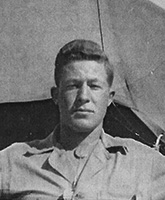 Perhaps it is the involvement of Roy Faulkner that is the most remarkable of all in this saga.  A Georgia native from Newton County who served in the Marine Corp during the Korean War.  He was a welder by trade and had never carved anything in his life.  He was hired to install an elevator at the carving to help the workers get to the carving for work.  He made several improvements to the torches that were being used to carve the granite and realized that he had an ability to work close to the rock face without losing the perspective on the whole carving.  He applied for the job of chief carver and got it.

Eventually he was the person who conquered the job and in about six years completed what others had struggled with since 1916.  He even stayed on for two years after the dedication to help disassemble the scaffolding.  So the carving was physically completed by a man who had never carved anything before and would never carve anything else.