As the Stone Mountain Confederate Monumental Association struggled to raise money to fund the project the ideas for sales grew more imaginative.  One idea was to do counterstamps for each Confederate State and to sequentially number the coins to create a uniqueness to each purchase.  The coins were auctioned to create additional interest and for numismatists additional rarity.  Then over time other designations were added to coins to suit the SMCMA's sales needs.  To add additional complexity to the issue, counterstruck (overstruck) varieties exist.

(A special thanks to Steve Deitert for sharing his research into the Harvest Festival and associated counterstamps.)

Many of the counterstamped varieties have but one PCGS certified example, and given the purpose or use in some cases only one example may have been created or may survive.  We have read that thousands were made, but we cannot find or verify those figures as of yet.  Assuming the sequential numbering was in fact accurate then the thousands may be accurate.  But collectors and supporters paid a real premium for the coins in auctions, often hundreds of dollars.  The record sale during the auctions was reported at $1,300 in Florida. 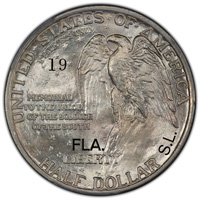 PCGS recognizes twenty-one distinct counterstamps but there are only 103 certified examples.  Six of the twenty-one have a single example, and three have only two examples.  Most of the certified coins are in circulated condition which seems a bit odd given that there were purchased by supporters and collectors and one might think they would have been stored away rather than carried.  In February of 2018 PCGS had certified only 12,526 Stone Mountain Half Dollars.  That is a little less than 1% of the total sold by the SMCMA.  Certified counterstamps number only 103 so If you own one you are one of the rare and fortunate collectors.

The certified figures do not include N grade coins and we know of one example where an N graded coin for an "LA G.L." is the only existing example attempted to be graded by PCGS.  Most coins struck with G.L. or S.L. will N grade because of their method of presentation.  Most if not all were given in a bezel or had a loop soldered to them.  This process damaged the coins by current standards and makes them upgradeable outside of an N grade.  But the rarity within a coin variety is unusual even in the numismatic world.

Through the years several people have done serious studies of this series, but with the rarity shown here we know of no one who has ever assembled a complete set.  Adna G. Wilde, Jr. may have come closest to a full set, and in his work published in The Numismatist in August 1987 he lists his owner or part ownership in sixty-four specimens.  But even with those large acquisitions he could not assemble a complete set of counterstamps.  Most of the elusive S.L., G.L., and U.D.C. counterstamps eluded him at the time of his publication.  We know from auction records after his death that he held many more, but they were apparently duplicates of other varieties or sub-varieties.

Understanding the Stone Mountain Half Dollar counterstamps necessitates that one understand and study the Harvest Campaign designed by the SMCMA to increase sales.  The campaign was also designed to create unique coins that would command a price above the current $1.00 price.  A side benefit was to involve the State governors in the process and increase interest through advertisement of the process.  The whole campaign was, unfortunately, designed to sell thousands of coins at a time that the association needed to sell tens or even hundreds of thousands.

The process is reflective of the post war times and created incentives that would have little or no interest today involving medals, festive balls, and racial limitations.  But apparently it achieved some of its intended results because we have the G.L. and S.L. counterstamps to prove it.  To understand how different the times were one only has to read the brochure cover for the campaign.

In Connection With The

Under the direction of the Southern

Governors to complete the sale

of the South's allotment of

An Opportunity That Leads To 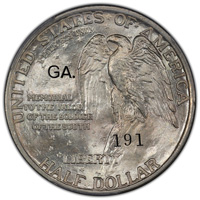 Coins were to be struck for different States, primarily recognizing those who joined the secession movement.  Those were Alabama, Arkansas, Florida, Georgia, Kentucky, Louisiana, Mississippi, Missouri, North Carolina, South Carolina, Tennessee, Texas, and Virginia.  But then some were also struck for Oklahoma and Washington, D. C.  The D. C. coins were probably as a concession to politics and sales over historical accuracy.  Oklahoma was a territory during the war and there were several battles fought there with each side claiming victory in about an even number of battles.  With resettlements from the east there were Creek, Seminole, and Cherokee people settled there.  From our research it seems that the Native Americans were almost always aligned with the Union forces.  But it is interesting that the state with the largest number of surviving coins is Oklahoma.

Only one coin for Missouri have ever surfaced so their sales success may have been limited or just not participated in this sales event.  We know that for general coin sales they were assigned a quota of 200,000 coins and the state chairman was Mrs. Frank S. Leach.

In a nod to the times and a process that would appeal to young women of the day the contest process was as follows: 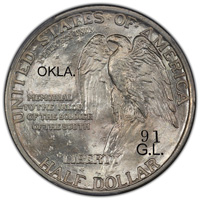 The actual ball was delayed until January 24, 1926 and was apparently well attended.  Newspaper accounts were filled with commentary we might expect from the era, but of historical interest for our work is the count of the States sending representatives and contest winners.  The pre-event communications sited as many as fifteen States in attendance, which apparently included Washington, D. C.  Listed in the Atlanta Constitution paper as sponsors, and we assume these were the State level winners, were:

(Data rearranged alphabetically by State, with represented City/Region listed in parenthesis for each winner)

There are several interesting things to be learned from these articles about coins sales:

And then there emerged from the ball a significant change in the results.  Rather than a single winner all were declared winners because apparently picking a single winner would have been impossible.  It seems to us that given the history of the SMCMA it is much more likely that the grand prize of a bust carved by Augustus Lukeman and a trip to Europe was financially impossible.  An easy way to dodge the required prize was to not award it, but that is conjecture on our part. 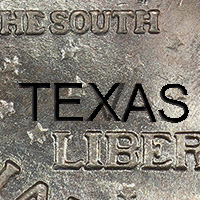 The SMCMA always struggled for money to keep the project alive.  So when additional coins were needed for a state several examples of reuse exist.  Of the twenty-one varieties PCGS recognizes there are three that involve the creation of additional coins for Texas by repunching coins from other States.

The double counterstamps are TEX./VA., TEXAS/VA, and TEXAS/LA.  This raises the possibility of doubled serial numbers depending on when the numbers versus the letters were added.  For Texas there might just be two examples of a numbered coin, one with and one without the double counterstamp.  The example shown here is the TEXAS/VA with the X overlayed on the V, with TE added before and S added after the original VA.  The lack of a hard strike on the A makes this one easy to recognize

As sales schemes came and went so did marketing ideas.  One that was a mystery and now has been solved are the addition of the letters G.L or S.L.  These designations were for Gold Lavaliere and Silver Lavaliere, two levels for those helping with the sales efforts.  These coins were also struck with the State designation and a chapter number.  Another issue is that these coins were often worn as necklaces, so they could be in a bezel or have a loop soldered directly to the coin.  This leads to many coins being disqualified from third-party grading because they are considered to be damaged.

In addition to these two designations there were coins struck with U.D.C. (United Daughters of the Confederacy).  Some single letters A., F., K., N., or T. have also surfaced.  These designations are not yet understood so far as our research has determined.  Documentation would also indicate that coins designated for veterans could have been made, but none of these have been seen either.

Where there is money to be made there can always be bad actors, and the Stone Mountain counterstamps can attract some.  Unfortunately creating a counterstamp is  not all that hard if you have the correct punches.  If one has questions the solution is only but authenticated PCGS coins or seek an expert opinion through a disinterested third party.  The saving grace for this issue is that to now there have been few collectors and the set is so expensive and elusive that few even try.  So disreputable people have little incentive to create fakes that have such a limited market.