When you begin to study the design of the coin and features then this becomes a coin of historical significance, but also one of some confusion.  Just as the original carving was designed by Gutzon Borglum, so was the coin.  The coin follows a portion of his original design for the carving, but this is not the carving that became the finished product.  To understand that issue you need to read the link on Modifications on the left.

We have seen an image of the preliminary galvanos of the coin that were used to make the dies.  These were dated 1924, so obviously more were produced to create the actual hubs.  Assuming no production changes, the galvanos included all the devices, lettering, and stars.  This would mean that none of the coin features were punched into the master dies directly unless needed to improve the work of the transfer lathe.  Features like date doubling may have originated with the creation of dies and not punches. 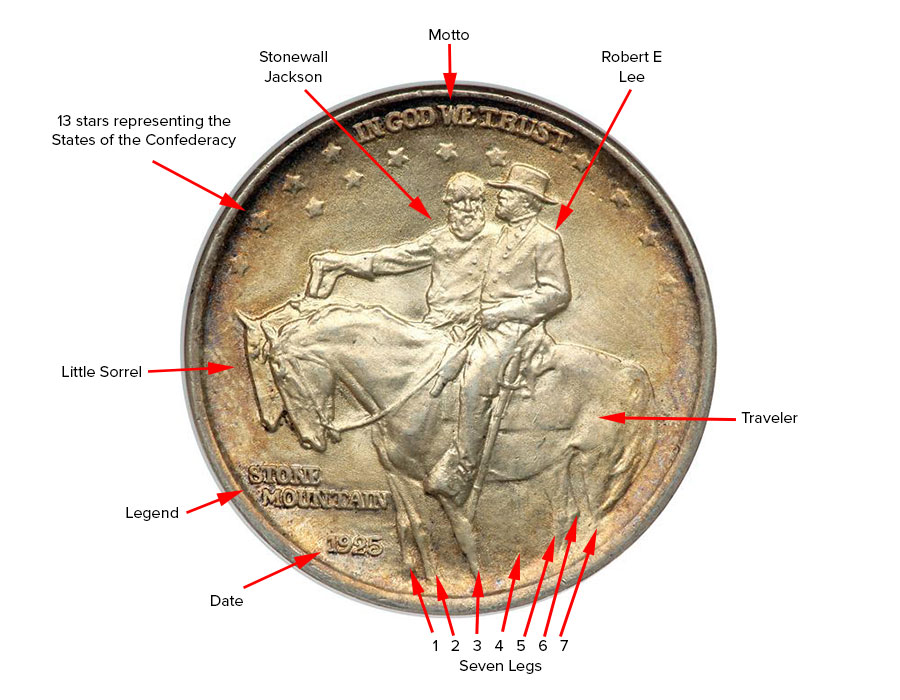 The obverse is has images of both Robert E. Lee and Stonewall Jackson in what seems like an advisory discussion while sitting astride their horses.  This is probably an allegorical pose since Jackson was killed by friendly fire long before the end of the war and became immortalized in many quarters for his bravery.  These two generals held legendary status both during and after the war and their inclusion of their images seem logical given the times.

We have read in some accounts that the thirteen stars represented the thirteen original colonies, but this seems unlikely and it is more probable that it represented the seceding states.  But even this is a stretch because to get to thirteen the South has to count Missouri and Kentucky which were at best border States.  The eleven core States were: South Carolina, Mississippi, Florida, Alabama, Georgia, Louisiana, Texas, Virginia, Arkansas, Tennessee, and North Carolina.  Even these States had factions that remained strongly pro-Union.  And then there were parts of territories in the west, but some how we get to thirteen and this seems like a nod toward the Confederacy and not the original colonies.

We are accustomed on United States coins to see both a legend and a motto on each face of each coin.  The obverse can possibly be classified this way if we consider the words "Stone Mountain" to be the legend and "In God we trust" to be the motto.

The construction of the images is such that Stonewall Jackson's horse, Little Sorrel, is obscured by Lee's horse, Traveler.  This leaves either six or seven and not eight legs visible.  Depending on your point of view the legs we have labeled as 5 and 6 are either separate or the back leg of Traveler.  We believe that Borglum intended them to be two different but overlapping legs to aid with the depth perception.  Borglum created depth with the legs and this led to some issues we discuss in die varieties.  There is also criticism of the construction of the coin and the lack of typical features which we also discuss in the area of dies. 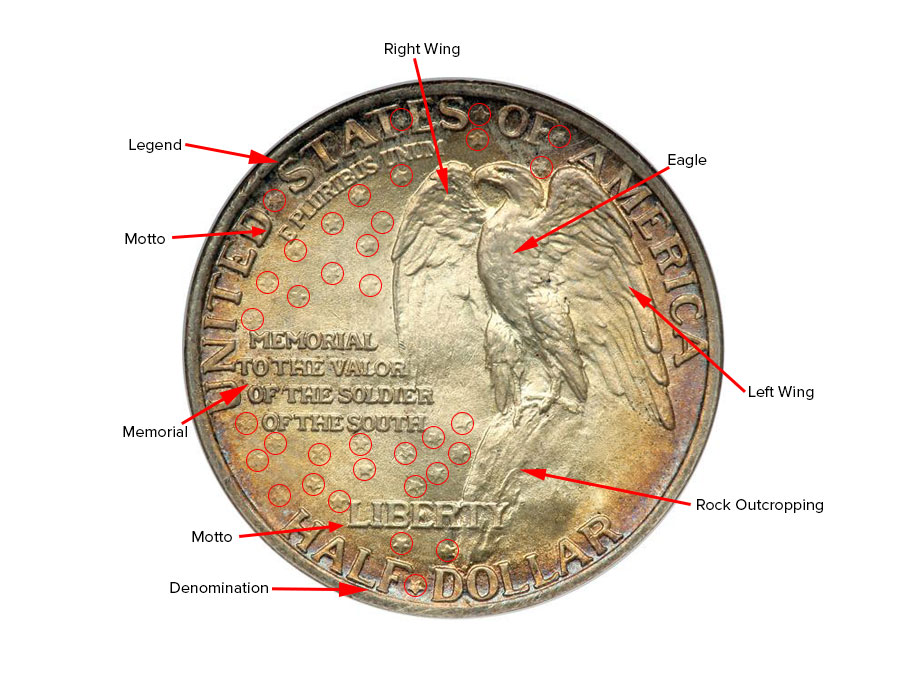 The reverse is also full of symbolism and does not follow the normal construction of a coin die.  This is perhaps because Gutzon Borglum was primarily a sculptor and not a coin designer.  We might consider the "UNITED STATES OF AMERICA" to be the legend since it is the most prominent lettering.  But then that leaves us with two mottoes: "E PLURIBUS UNUM", and "LIBERTY".  Then for lack of a better term we will call "MEMORIAL TO THE VALOR OF THE SOLDIER OF THE SOUTH" the memorial phrase.  It seems to us that the eagle is well executed and appropriately sitting on a rocky outcropping, perhaps symbolizing Stone Mountain.

But then we get into some design issues that we don't think a Mint engraver would have allowed.  Borglum treated the whole reverse as a piece of art and there is no field level for a background.  This allowed him to create a softer area to present the thirty-five stars in, but from a practical standpoint it gave no area to polish when needed to make die repairs, or would at a minimum made them exceedingly difficult.  Rarely have we found a single coin where all thirty-five stars are visible and it can often take a half dozen coins to locate them all.  The stars are in low relief and are easily damaged or poorly struck on even mint state coins.

The stars also represent a bit of a quandary since they seem to correlate to no Union figures of the time.  In 1861 at the outbreak of the war there were thirty-four States.  By the end of the war with reunification there were thirty-six.  So were we averaging out, leaving out West Virginia, counting wrong, not finding a thirty-sixth star, or do they represent nothing other than thirty-five stars?  We obviously need some more digging through Mint records to figure this one out.