There are some very interesting issues with the production of the Stone Mountain half dollar.  Unless you really dig in these escape the average collector, and it is reasonable to assume that some of these issues exist for other commemoratives of the era since production techniques were the same.  But the Stone Mountain Half seems to have had more than its share of challenges. 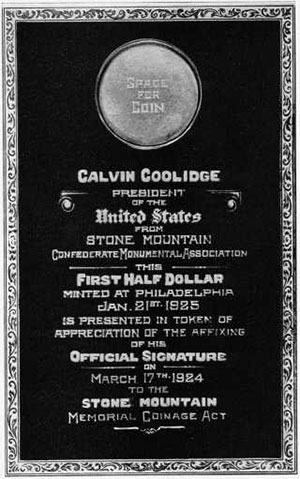 The first coins were struck on January 21, 1925, with the first 1,000 going to special distribution or presentation pieces.  The first coin was mounted in a presentation plaque made from Georgia gold, and presented to President Coolidge.  Subsequent coins were mounted to silver plaques and given to dignitaries including Congressmen.

All of the coins were produced during the calendar year 1925 and then a lack of sales delayed the production of any more.  Most of the coins went into storage awaiting sale to the Stone Mountain Confederate Monumental Association.  The long delay in purchases by the SMCMA probably accounts for a number of quality issues.  It was noted in the June 30, 1925 Director of the Mint Report that all coins had been minted by that date.

The Mint was wise to delay the production of more coins because the problems that plagued the SMCMA persisted for years.  Selling all 5,000,000 was a vision and not a reality.  The SMCMA seemed to lack the skill and organization to manage the sculpture, sales, and other activities.  If other issues had not stopped the effort, nothing could overcome the Great Depression and the pullback in most efforts that did not contribute directly to the economic recovery.

If you are a student of the Civil War, or you lived in the South in the early part of the twentieth century, you instantly knew who the two men were on the coin.  But in our opinion that is where the art ends and the conflict began.  The very public battle between Gutzon Borglum and James Earle Fraser produced a compromise design and to us it looks very much like a compromise.  Fraser's comment that the final design was "barely passable" is unfortunately accurate, but he and the Fine Art Commission were probably worn out with the conflict. 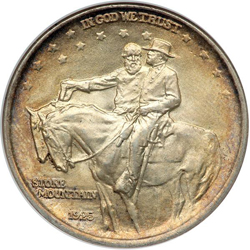 We are accustomed to coins where the fields and devices are clearly delineated and there is some crisp detail to both devices and lettering.  But Borglum and Fraser fought over these until it seemed that the two men just gave up.  Borglum was a great sculptor but he had no experience in designing coins and he tried to impart the carving to the coin.  The result is a coin where the devices are too soft and the lettering has no real clarity. 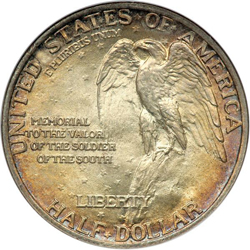 Adding to these issues is no real field, or flat surface to have the devices stand out.  Borglum instead designed both sides with an intent to show Lee, Jackson, and the Eagle as figures standing out from the rock.  The practical aspect was apparently lost on Borglum.  Coin dies often have to be repolished to remove cracks or damage.  The lack of a flat field meant that dies started to lose detail quickly or just had to be retired.  There were only eighty dies made for production, we assume forty die pairs, meaning that each die had to last for about 125,000 coins in production.

Making matters worse was the addition of faint stars in the uneven fields of the reverse.  When the coin is fully struck these add interest to the coin.  But coins were rarely fully struck because he added so much detail that there wasn't enough metal to reach all the recesses in the die.  And then there is the issue of just how many stars.  Borglum's original design had thirty-six stars, one for each State in the Union when the Country was reunited.  But in the final design one was left off leading to questions about which State was omitted.  But this is likely a production oversight at the Medallic Art Company and a lack of quality control at the Mint and Borglum intended thirty-six stars since these were in his original design. 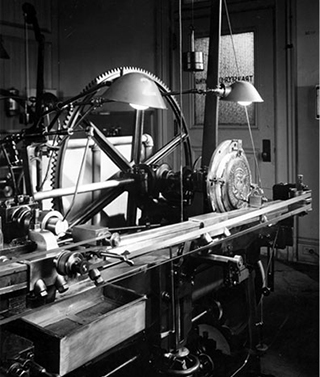 The U. S. Mint was not producing master hubs and master dies for commemorative coins in 1925, and that work was performed by the Medallic Art  Company of New York.  While this might seem strange, for a coin like the Stone Mountain Commemorative it may have been the only option because Borglum's mimicking of the mountainside for the fields would have created quite a challenge in reduction.  In the Director of the Mint Report for 1925 it is noted that the working dies were made by the Engraving Department of the Mint.

The U. S. Mint and Charles E. Barber fought the introduction of the Janvier Reduction Lathe until President Teddy Roosevelt insisted on its acquisition for the Saint-Gaudens gold series in 1907.  But the Mint's limited use of the new lathe because they were more comfortable with its predecessor, the Hill Lathe.  The Medallic Art Company was familiar with the Janvier Lathe and would have had the skill to produce the master hubs while preserving Borglum's design.  We assume that the Mint actually made the master dies from these hub but we lack documentation so far to prove that step in the production process.

Perhaps there were people at the Mint who did not approve of the coin, or maybe the production quality was lacking.  But our experience with other coins is that the Philadelphia Mint usually produced quality products.  With the Stone Mountain Half quality seems to have been lacking.  There are many double die coins available and many coins produced on rotated dies.  These two issues seem to have gone hand-in-hand but there seems to be an inordinate number of these coins among those available.

And then there is this wild card to consider.  The Civil War had been over only 60 years in 1925.  That is closer to the Mint workers than World War II is to us today.  There would have been Union veterans in Philadelphia but it is unlikely that they would have been Mint workers.  But it is very likely that many Mint employees had parents that fought in the war and perhaps given the rate of attrition, lost parents in the fight.  So it is not inconceivable that there was some resentment among employees making the coins. 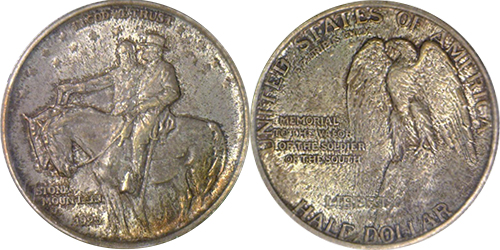 Our involvement with this coin is relatively recent but one thing that has been obvious is that there are a large number of mint state coins with moisture or storage issues readily available.  There are so many that they seem to be the norm rather than the exception.

There are many possibilities for the poor condition of the coins and here are a few. 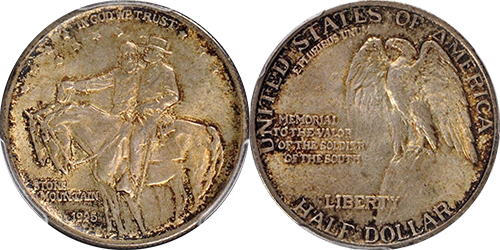 First, the coins were released to the SMCMA as requested for sale.  The SMCMA had difficulty with the sales and obviously had to store the excess inventory.  It is likely that the storage conditions were secure, but perhaps not secure from moisture.

Second, storage of coins by purchasers could have been less than desired and a large number of coins could have entered the market after being stored in less than ideal conditions from individual collectors.  This seems less likely because too many of them have the same characteristics.

Third, The final decision to suspend sales did not come until 1930 when the Great Depression finally killed off the work.  This required that the Mint in Philadelphia provide storage for decades.  Since the coins could only be sold to the SMCMA the Mint could not dispose of them until the sales were completely called off.  We have seen large quantities of Morgan Dollars from various mints with similar damage.  These usually came from vaults with less than ideal conditions and that seems to us to be the most likely situation.  Whatever the reason there are plenty of them and they seem to dominate the sales.