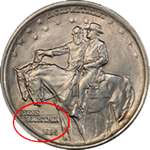 When some grading services designate any Stone Mountain coin as a "Double Die Obverse" this is the classification it is given.  The designation originates with the numbering system devised by Bill Fivaz and J. T. Stanton  in the "Cherrypicker's Guide to Rare Die Varieties."  FS-101 is the new designation and with FS-001 now obsolete.  But we are discovering several different obverse double die varieties, so which one is the one listed in the "Cherrypicker's Guide?"

The coin is described as "Strong doubling on the date and STONE MOUNTAIN."  We have several examples of this variety, but also examples where it is paired with a doubled reverse.  So we know this obverse die was paired with more than one reverse die.

So which die is the correct one, and how do I know if I have the right one?

One way to do it is just to buy pre-certified coins, but you run the risk of the grading services becoming more exact in the future.  Below are some examples and a short cut or two to help with the identification. 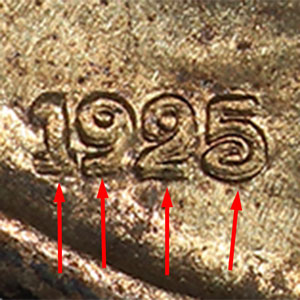 One thing to look for with the FS-101 variety is strong doubling of the date where all four numerals are doubled at the bottom.  This is one clear indicator that the obverse die is correct.

We are discovering many if not most STONE MOUNTAIN coins have some date doubling, so look for the full doubling.  Another issue can be with the collapsed dies, which is  present on many coins toward the rim.  When this happens the 1 or 19 can lose its doubled appearance. 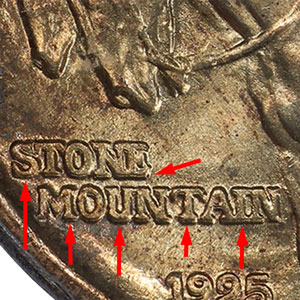 The second thing to observe is clear signs of doubling on all the letters in STONE MOUNTAIN at the bottom.  We have not seen examples that the wording can be completely obscured by the collapsed die issue beyond the letters S and M. 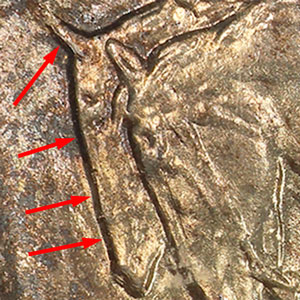 On most Stone Mountain commemoratives when there is die doubling it also shows up with a doubling of the front edge of the head of Little Sorrel.  Normally we might attribute this to a production issue, but we have seen it so often as a feature that we now think it is on the die.  When there on the FS-101 it can extend the full length of the head up to the tip of the ear.

But it is not always present and should be used for extra confirmation and not a definite trait.

And then there is one of our favorite identification tools, die cracks and breaks.  So far all of the coins we have seen classified as FS-101 have one of two type die cracks. 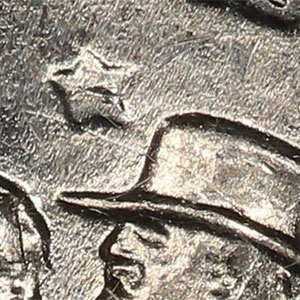 First there is one that is very common where there is a faint crack that runs across Lee's hat and into the bottom of the first star above his head.  There are several other dies where die cracks follow a similar path to the second star.  These can have a little date doubling but it is not as complete and we do not believe these are intended as the FS-101 variety. 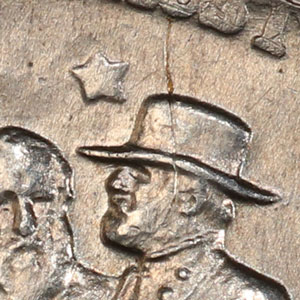 Then we have one example that we believe to be the same die that has a more severe die crack that runs from the S in TRUST almost straight down through Lee's hat and on to his face.  The lettering on the legend may indicate that this is a later state of the die because of a greater collapsing of the lettering at the coin's rim.

It is always possible that the die was pulled from service and the minor crack polished out, only to fail more completely with the resulting vertical crack. 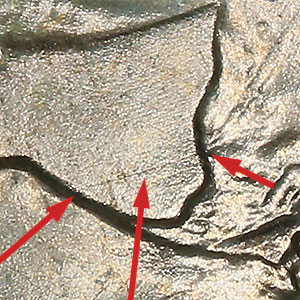 And then in 2019 we found another marker that has really helped.  The FS-101 has been repolished, rather harshly and this left some identifiable polish lines under Jackson's are.  One of these seems to always be present and it is shown here.